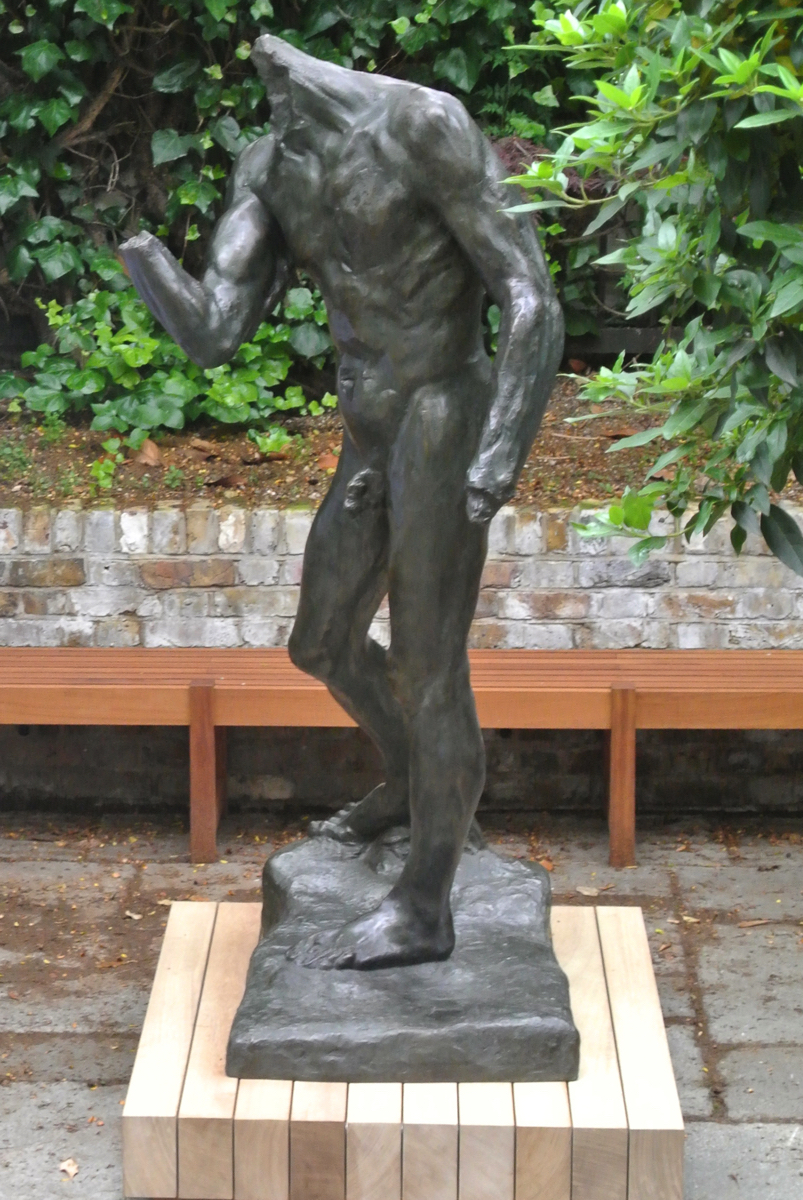 Bronze with a green patina

Inscribed A. Rodin, © by Musée Rodin and numbered 2/8, one of the eight examples numbered in Arabic numerals, dated and stamped with foundry mark

A certificate of authenticity, signed by the Director of the Musée Rodin, is given to every purchaser of an original bronze by Auguste Rodin.

This work will be included in the forthcoming Auguste Rodin catalogue critique de l’oevre sculpté currently being prepared by the Comité Auguste Rodin at Galerie Brame et Lorenceau under the direction of Jérôme Le Blay.

We are indebted to the Musée Rodin for the following:

The city of Calais wanted to pay tribute to the heroism of six town leaders who, at the end of a one- year siege in 1347, were willing to sacrifice their lives for the citizens of Calais: King Edward offered to spare the people if six of the most powerful men of the town handed over the keys to the city. This episode of the Hundred Years War is well known and widespread in France and England through the Chroniques de France by Jean Froissart (1360-1365).

However, no one had created a project that recognized the history of the old Calais until 1884, when the city joined with the neighboring commune of Saint-Pierre and the existing city walls were extended. On the 26th of September, the mayor Omer Dewavrin suggested that the town council search for a sculptor with the aid of a national appeal fund to create a monument dedicated to Eustache de Saint-Pierre and the other city fathers to be erected on the site of the merger of the two cities.

Some days later, the mayor got to know Rodin through Prosper-Adrien Isaac, a painter originally from Calais, who had settled in Paris. This was the first meeting between these two men whose collaboration would last for ten years. During this period, Dewavrin had many doubts: Rodin appeared very rigorous in the beginning, then became apathetic when the achievement of the monument was about to fail, so the commitment of his intermediary was necessary to complete the project successfully.

The Burghers of Calais were formed fully nude, then molded and only then dressed; the finalized versions of the first three statues, of which Pierre de Wissant was one, were exhibited in the gallery of Georges Petit, Paris in May 1887.

In 1900, Rodin showed in addition to the final model of the monument a fragmentary study of the nude Pierre de Wissant: The tracks of the armature under the left foot and right shoulder prove that the figure is in a preparatory state for the finalized monument, whereas the lack of hands exemplify Rodin’s working process: The sculptor had the possibility to experiment with different montages. However, over time Rodin realized that the figure had the posture of a slender dancer, as it has a subtle twist. Around 1903 – 1904, Haweis and Cole photographed the statue outdoors in Meudon, but Rodin had already decided to exhibit it in a place of honor--in the middle of the rotunda that served as the entry to the Pavillon de l’Alma, the site that had been reserved for his Eve.

The decision to introduce the retrospective of his complete oeuvre with this nude had a symbolic value: It was indeed one of the group elements that constituted his first grand realization, The Burghers of Calais. The figure was presented in plaster, a material that was used for studies but which could be seen in 1900 as the result of Rodin’s recent revolutionary exploration of the essence of sculpture. In spite of the importance that Rodin gave to the Pierre de Wissant, nu monumental sans tête ni mains, the figure was in fact never cast in bronze during his lifetime.